Two years ago I described the trip to Alaska as the Great Alaska Adventure, noting on several occasions the difference between a vacation (take it easy and let someone else do the work) and an adventure (take what comes and do all the work).  As the heavens opened up on me again, I reminded myself that this trip is an adventure.  So, garbed in semi-waterproof rain gear again, I sang along with who ever was singing on the CD player, and kept rolling down the road

The Snake River cuts a picturesque swath through Idaho

Rain didn’t fall all day today, but it did come down most of the time I was in Wyoming. and off and on through Idaho  Hence, no pictures of the Wyoming Range from the Cowboy State.  I had clear skies some of the time I was in Idaho and took advantage of what the good weather had to offer by checking out the scenery.  I’d seen some of it before on previous trips, but it’s still impressive.

Drifting on the Snake trying to land a “big one.”

I followed the Snake River in Idaho for an hour or so, and that was all new to me.  At one stop I learned the Snake River is one of the few places where Yellowstone Cutthroat Trout are native and continue to thrive.  I pulled over at an Idaho State Recreation facility where dozens of specially designed boats were being launched into the Snake by fisherfolks in search of Cutthroats, Browns, and Rainbows. It looked like a good way to spend the day if you couldn’t be on a motorcycle. 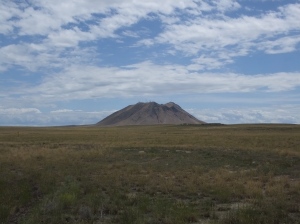 This butte was formed about 300,000 years ago when lava seeped through the surface and formed the mound.

Traveling across Idaho I was reminded at how geologically young some of the landscape is.  Between 5,000 years and 300,000 years ago, Idaho saw sporadic volcanic eruptions, though not on the scale of the Cascade range.  These eruptions created small buttes in some areas and large, flat lava fields in others.  Compared to rocks more than a billion years old that make up most of the Rockies, some of the land seen in Idaho is in its infancy.

There was also a roadside exhibit commemorating a 1985 earthquake that lowered a valley nine feet and raised the tallest mountain in Idaho, Mt. Borah, an additional six inches.  Small changes over vastly long periods of time inevitably results in big changes and a landscape that never looks the same.  Nothing, it seems, not even mountains, is permanent.

One of the joys of riding on the backroads of America is the chance to see the extraordinary.  Yesterday it was a pink dinosaur.  Today it was a submarine conning tower in Arco, Idaho.  It turns out that most of the material used in the Navy’s nuclear sub fleet is processed and made ready in Idaho.  Did you know that Arco was the first city in America to have electricity powered by a nuclear reactor?  Well now you do.

Arco also is the home of the “Atomic Burger” at Pickle’s Place.  I didn’t have an Atomic Burger, but I did have a nice slice of blackberry pie and coffee for lunch at Pickle’s.

Not too many pictures because of the rain, but between downpours I managed to get a few that reflected today’s ride.

Tomorrow should be a great ride; I’ll be going up and down mountains, including the Bitterroot Range on twisty roads much of the day.  The stuff adventures are made of. 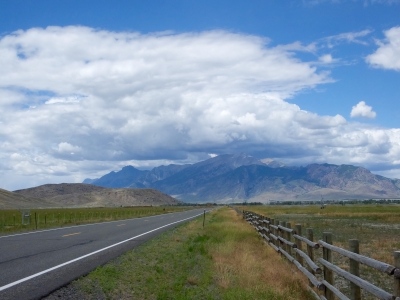 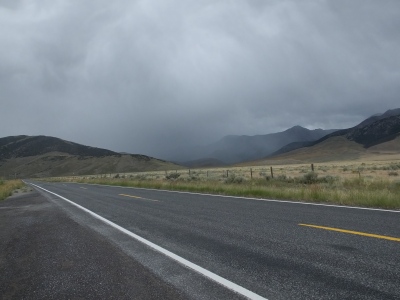