Don’t forget to click on the pictures for a larger image.

Today’s ride saw as many mesas as mountains.

After a short journey with my compass heading showing south, I looped around Santa Fe and the southern end of the Rocky Mountains (at least by most definitions) and squared my handlebar east and west.  For the next two weeks or so, I’ll be going north by northwest until I cross the Liard River in Yukon Territory.

The Great Rocky Mountain Adventure is only eight days old, and so far I’ve ridden the Appalachians, the Cumberland Plateau, and the Arkansas Mountains; visited family; and gotten an enticing taste of riding in the Rockies.  That qualifies as a pretty good start in my book.  (Well, actually in my blog but it will be a book eventually.)

Except for the last hour when I rode in heavy and moderate rain, today’s 10-hour ride was a good one, with two stops that deserve extended mention. 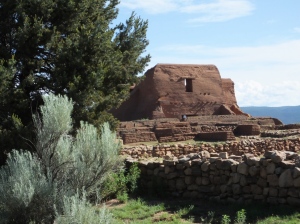 The foreground walls were built in the 1600s for the first church; the larger structure is what remains of the second church.

Stop one was the Pecos National Historic Site, about 15 miles east of Santa Fe between the Sangre de Cristo Mountains and the Glorieta Mesa. Operated by the (underfunded) National Park Service, the site hosts ancient ruins, evidence of the Spanish conquistadors and their culture-crushing priests, the decline and end of the Pueblo people there and even the westernmost battle of the American Civil War.  I took in as much as I could in a two-hour stop and had several questions answered by a young NPS interpreter named Michael, but I could have spent the entire day there. Evidence of the Pueblo people goes back at least 1,000 years and by 1450, almost 50 years before Columbus “discovered” America, Pecos pueblo boasted a five-story city/fortress that housed about 2,000 hunters/farmers and dominated the trade routes between plains and western Indians.  That fortress has long since crumbled, but its remains have been studied and mapped by archeologists for more than 100 years; the walking trail I followed gave a good idea of the size and scope of the settlement.

Coronado, in his unfulfilled quest for golden cities, first arrived in Pecos Pueblo in 1540, but finding no riches he left quickly.  The Spaniards returned in force about 100 years later and this time the soldiers were accompanied by friars who sought to end Indian religion and replace it with their own.  The first church built next to the pueblo was burned in an uprising in 1680 but a second one was built over the ruins of the first a few years later.  By 1800, disease and a disfunctioning society reduced the once thriving pueblo to fewer than 300 inhabitants and in 1838 the last of the Pecos Indians left the crumbling remains of the pueblo.

Walking through the ruins, it was hard not to think about how our history unfolded in ways that are often ignored by history classes that still often refer to European settlement in glowing terms.  I’m glad the NPS is preserving this small segment of our past. 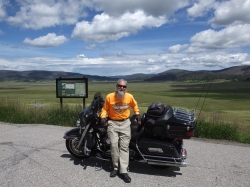 Behind me is the Valle Caldera. The “mountains” in the background are the far side of this immense extinct volcano.

The second stop, much shorter than the first, found me looking across miles of waving grasses growing in the remains of huge volcano.  The Valle Caldera, located just west of the sprawling Las Alamos National Laboratory, was the result of a huge volcanic explosion about 1,000,000 years ago that ejected about 500 times as much debris as the Mt. St. Helens eruption on the 1980s.  When the volcanic debris ejected, the cone settled in on itself, creating the caldera.  Standing on the edge of one of the most powerful forces on the earth, surrounded by mountains that are actually the lip of the ancient volcano inspires a very profound sense of awe.

Most of the day was spent traversing the mountains, just as I did yesterday.  First, west, then east to get in as much mountain riding as I could.  What was especially fun today was riding up and down canyons with towering red sandstone walls on both sides and mesas and desert-like conditions at the bottom of each canyon.  Even the pictures I stop occasionally to take don’t seem to do justice the ever-changing beauty of the mountains. 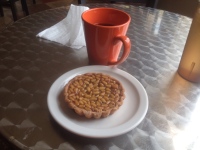 Today’s pie report is brought to you by the Highway 4 Cafe and Bakery in Jemez Springs, New Mexico.  Actually, they didn’t have any pie but they did have a very good Pinon Nut Tart strongly reminiscent of pecan pie without the pecans.

Tomorrow, the Million Dollar Highway and the Black Canyon of the Gunnison.