GRMA About to Begin

Tomorrow morning, surrounded by the misty Appalachian Mountains, I’ll fire up my Harley-Davidson, roll down the hillside on which our North Carolina cabin sits and begin The Great Rocky Mountain Adventure (aka GRMA).   If all goes well, I’ll return in about six weeks after logging more than 10,000 miles on the bike and wandering through eleven states, two Canadian provinces and one Canadian territory.  Along the way, I’ll once again use this blog to stay in touch with friends and family and to record the adventures, misadventures and amazing sights one finds only on two wheels on the open road.

For the past several weeks, Willie Nelson seems to have established residence between my ears, constantly crooning “On the Road Again.”  I frequently whistle along, much to the distraction of Marilyn. 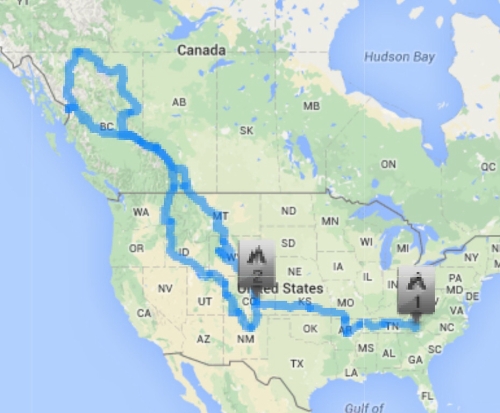 This map shows the general route I’ll follow.  I’ll head west from the Appalachians, cross Tennessee’s Cumberland Plateau, and wind through the picturesque mountains of northern Arkansas before pausing briefly for a family stop in Wichita.  Then I’ll be on the road again to Colorado where I’ll begin the heart of this year’s adventure:  a loop around and through the Rocky Mountains.  All of them.  I’ll meander south for a couple days to Santa Fe, New Mexico, and the southern terminus of the Rockies (according to geologists who should know about these things). Then I’ll change my compass heading to north by northwest and head back into Colorado, continuing through the corners of Utah and Wyoming before riding through the rugged Bitterroot Range in Idaho and up to the Canadian border.  There, I’ll begin an 11-day sojourn through the Northern Rockies in Alberta and British Columbia (with a quick jaunt into the tail of Alaska) before completing the northward trek in Yukon Territory where the Rocky Mountains taper to their northern end. Then I’ll point my headlight south again, hugging the eastern slopes of the Rockies through Canada, Montana, Wyoming and Colorado, ending, I hope, at the top of Pike’s Peak before heading east and home.

This year I’ve added a new feature to the blog:  A GPS tracking program to trace each day’s ramblings on a map.  Beginning tomorrow, there will be a link on each blog post to a map showing that day’s route.  It’s not a perfect representation of every mile on the road, but it will show where I was at five or ten minute intervals during the ride.

Many years ago, the quintessential American naturalist John Muir wrote:  “The mountains are calling and I must go.”  That’s as good an explanation as any for why I plotted this year’s adventure the way I did.  Mountains, whether shaping the American West or Western North Carolina, soaring skyward in Switzerland or Tibet, or rising majestically from the the plains of the Serengeti or the Chilean shore, are special.  They inspire awe and they inspire “aahhhhs.”  They are the home of gods and they are the home of good.  They show us our potential and remind us of our limitations.  Oh, and they often have really great twisty roads that beg for more lean and more throttle.  For these reasons and more, I’m bound for the Rocky Mountains.

In a sense, this adventure is a sort of homecoming for me:  I was born in Boulder, Colorado, at the foot of the Rockies.  I vacationed in the Rockies as a child.  I worked in the Rockies for four years.  I’m drawn back, it seems, by a powerful force.

Waiting for tomorrow began about a year ago when I finished my Newfoundland/Labrador trip.  I no sooner finish one riding adventure before I begin dreaming about and preparing for the next one.  I’ve studied maps of the Rockies.  I’ve read histories of the area. And I’ve learned about the geology of the area.  On the road I expect to learn more.  And I expect to share what I learn on this blog.  Hey, professorial inclinations die hard.  What can I say.

I would write this blog if nobody read it.  But, believe me, writing means more if someone is reading.  So, to my friends, family and thousands (dozens?) of unknown readers, thanks for following along again this year as my journey takes me to new heights and new sights.  You’re encouraged to comment on the blog as you join me on the Great Rocky Mountain Adventure.  You’re also encouraged to share http://www.hdriderblog.com with friends you think might be interested in my ramblings. The blog, as always, is the unfiltered, unedited reflections at the end of a long day on the road, often written with the help of my writing coach Jack Daniel, so please pardon any lack of clarity or roughness of style as I muddle through each post.

Yes, Willie, I hear you.  I can’t wait to get on the road again, either.

11 responses to “GRMA About to Begin”