Blue & Grey Campaign: Day 1 Where It All Began 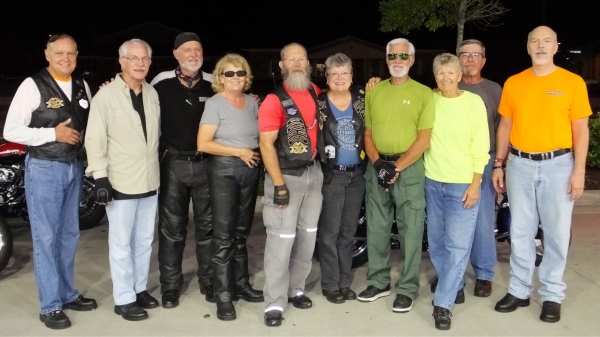 Are we ready for this? Hell yes!

Despite a meeting time of no later than 6:15 a.m., the Blue & Grey campaigners arrived in the early morning Orange Park darkness on time and eager to hit the road for what turned out to be a long day.  After the obligatory group picture, we rolled onto the highway promptly at 6:30 and pegged our cruising speed at whatever the speed limit allowed as we headed north,  a beautiful sunrise greeting the day and the 10 riders heading north.

On our way to Ft. Sumter aboard the tour boat.

The first half of the ride consisted of Interstate and four-lane highway riding, which wasn’t exciting or even particularly interesting, but it did satisfy our need to get to Charleston, S.C., in time for a lunch of ribs and barbeque served by an exceedingly perky waitress at Sticky Fingers.  Then we rode on to Patriots Point where we boarded the tour boat that landed us, 30 minutes later, at Ft. Sumter, in the middle of Charleston Harbor. 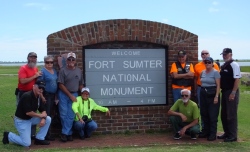 We arrive at Ft. Sumter.

Everyone on the campaign agreed on two things:  First, the fort and its artifacts were impressive and served as a good start to our nine-day tour and, second, the 65 minutes we had on the island before our ride back to shore left was not nearly enough time to fully take in all the history and information the National Monument had to offer. 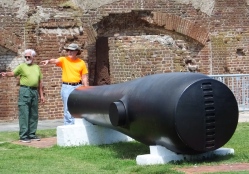 Ski and Mark agree to move the cannon “over there.”

Several members of the group remarked on how inspiring it was to stand on and walk among the ruins (largely but not completely restored) of the first battle of a war that dramatically changed our nation’s history and took more American lives than all other wars in our history combined.  The first shots were fired on the 85-man Union garrison in the fort on April 12, 1861 with no casualties.  Four years later, when the war ended, more than 500,000 Americans had died fighting to change the union.

The Ft. Sumter site has been substantially restored,  but not to its 1861 appearance when it stood three-stories tall on four sides with an additional story on the fifth side of the pentagonal fort.  Nearly all the bricks on the site are original and dozens of cannon are still in place, including several of the biggest cannons ever fired in the Civil War. 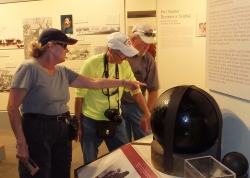 Helen, Terri and Ray examine exhibits in the museum.

We wandered around the site on a day where the temperature was in the 90s and the humidity was nearly the same, looking at gun emplacements, cannons and the thick, battered walls that tried to protected both  Union and  Confederate troops from 1861 to 1865.  We also spent time in the small air-conditioned museum that did a good job presenting interpretive artifacts and telling the history of the fort before, during and after the Civil War. 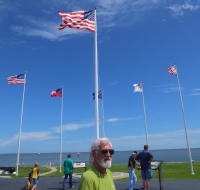 The flags of Fort Sumter wave over Ski who looks at Charleston in the distance.

We took one final look back at the fort as we pulled away from the dock in the tour boat, knowing we had a better yet staggeringly incomplete picture of how this great civil conflict began.

Back at the bikes, we looked at weather radar and decided that the potential for late afternoon thunderstorms warranted at least the donning of rain pants.  But the 90 degree temperature and the oppressive humidity argued against adding rain jackets, at least initially.  A couple of awkward turns based on dueling GPS systems and we found our way to US 17 and the final run north to our day’s destination in Myrtle Beach.  Darkening gray thunder clouds and the occasional sprinkle convinced us to stop and add jackets about an hour south of Myrtle Beach.  But the temperature had cooled enough that the jackets were at least sub-sauna.  We never did encounter any serious rain on the way in, though we did see some wet pavement. 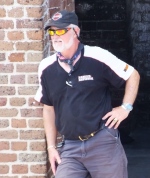 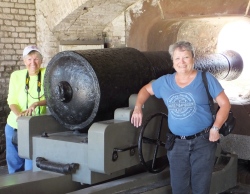 This cannon is at rest and so are Terri and Marilyn.

A little after 6:30 p.m. we rolled into the Best Western for an excruciatingly slow check in after a tiring 12-hour day that had begun 350 miles earlier in a dark Orange Park.  Tired but not whipped, we marched off to dinner and some discussion of the day’s activities.

Tomorrow we ride to Fredericksburg, Virginia, where we will spend Monday touring two separate battlefields.

Remember to double click the photos for larger images.

One response to “Blue & Grey Campaign: Day 1 Where It All Began”