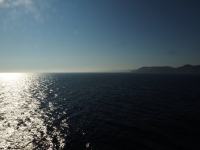 As I sit in the colorful lounge of the luxury ferry “Atlantic Vision” carrying me on a 16-hour, non-WiFi-equipped voyage from Argentia, Newfoundland, to North Sydney, Nova Scotia, and the mainland, I see the rocky shores of Newfoundland receding into the foggy distance like a vision slowly disintegrating.  Soon we’ll be out of sight of land completely and the sun will set over the westward-pointed bow of the ship and into the ocean.

Two weeks ago I drove off another ferry at Port aux Basques, Newfoundland, headed into a 16-day adventure I had anticipated for six months, not knowing exactly what to expect but expecting something out of the ordinary.  Indeed, the last two weeks has been “out of the ordinary.”  If I didn’t already have a second home in North Carolina, Newfoundland would be high on my list of potential summer retreats.

Those who follow my digital scribblings during the days since I rolled out of Maggie Valley on my way to the northern adventure have no doubt dectected my growing fondness for the land and the people of this rugged island and its neighbor separated by the chill waters of the Labrador Straits.

The island I see fading behind me doesn’t have the mountains of Colorado or British Columbia.  It doesn’t have the glaciers of Montana or Alberta.  It doesn’t have the vastness of Alaska or the wild rushing melt-water rivers of the Yukon.  But it has a starkly unique shape, structure, and topography created hundreds of millions of years ago that ended up attached to North America in a twist of fractured-earth fate.  It has a prehistory going back thousands of years when the first nomadic residents followed the fish and the seals and left behind tantilizing archaeological clues to their disappeared cultures.  It has a history that reaches deep into Europe’s past when the Nordic Vikings first landed in the New World more than a thousand years ago.  It has a modern history that begins with the earliest 16th century English, French, Portuguese and Dutch voyages of exploration and settlement.  It has a rich ethnic history that lives today in its place names, its songs and its languages.

Margaret and Anita grew up near Tors Cove and came back to visit.

Looking out the window as I write, I can still see the fog-shrouded land, stretching its rocky beaches into the sea.  But I can’t see what I will miss most:  the people.  The B&B mistress in Twillingate who started every day for me with “Good mornin’ m’ love.  Fine day for a ride, eh?” The knowledgable interpreters at historic and geologic sites who graciously made time for my endless questions and led me to a better understanding of their island home and its residents.  Mitch and Daniel, my young kayak guides whose paddlng commentary added to the aquatic adventure.  Sisters Margaret and Anita and their friends who made me feel at home in Tors Cove at their rollicking “kitchen party” and whose stories of their childhood helped color the canvas of my experience here.  The people of the villages of Fonteau and Red Bay in Labrador who made me part of their Canada Day celebrations and shared their traditions and their community with a stranger.

Today’s ride to the ferry from my final B&B in Tors Cove meant suiting up from the beginning in rain gear and heated jacket.  Not heavy rain and not real cold, but wet enough and cool enough to use the gear I’ve lugged around for three weeks.  I rode another loop, this one the 125-mile “Cape Shore Loop” that took me ultimately to Argentia and the ferry.   Several stops along the way appealed to me but I only had time for one stop if I wanted to make it to the ferry on time.

At the tip of Cape St. Mary (I think everything in Avalon is named for a Saint) is an ecological preserve that contains one of the largest collections of dozens of species of sea birds on the island, and the largest collection of one particular bird:  The Gannet.  The ranger at the visitor’s center assured me I would be able to see the birds through the grey fog that covered everything except the sound of the fog horn at the nearby lighthouse.  So I hiked the mile-long, sheep-poop covered path along the 200 feet high cliffs (that had no fence or guardrail anywhere!) to Bird Rock. Oh yeah, I could see them.  Thousands of them.  Covering almost every inch of a large rock (small island?) next to the cliffs.  The fog made taking pictures difficult but I managed to get a couple.  I’m not a birder, but I have to admit seeing–and hearing–that many birds landing, sitting, taking off, soaring, chasing was pretty cool and the hour-and-a-half detour was worth the time.

When I booked the ferry, the website indicated WiFi was available, but they have sinced changed their policy.  Because I don’t have wifi on the ferry, this will get posted sometime tomorrow as I travel through Nova Scotia.

Watch our for golden opportunities that enrich your lives and I’ll do the same.

Leave a Reply to Bob and Pat Ramer Cancel reply