First, a question:  If I go to Labrador, pick something up and bring it back, does that make me a Labrador Retriever?  And if so, will someone adopt me, take me home, let me up on the furniture and feed me treats?  Just wondering. 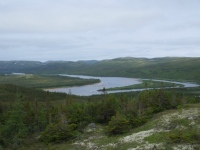 They refer to this as “The Big Land”

The paved road in this part of Labrador is only about 50 miles long, so I knew I wasn’t going to get in a lot of riding today.  But the riding I did do was through some starkly beautiful country and the cold, early-morning fog that perched on the mountain tops added to that rugged beauty.  It was cool (cold?) this morning with temperatures in the low to mid 40s but heated gear fended off any chill there might have been as I rolled carefully down the road peering through the fog looking for potholes and large critters.

The Pinware river attracts salmon and the men who (try) to catch them.

I paused briefly along the way at the beautiful Pinware River, where a substantial number of frustrated fishermen had determined again today that the Atlantic Salmon had still not started making their way upriver.  There was not a line in the water but they were properly attired in their waders, netted hats, and plaid shirts just in case their aquatic prey began their upstream swim. Since they probably fish all the time in waters like these, they may have been immune to the scene that riveted my attention.  Fast water coursing whitely over boulders stretching through multi-green colored trees to the distant mountains like a liquid snake kept me staring for sometime, wondering why the fishermen didn’t just sit a spell and take it all in with a deep, satisfied breath.  Maybe they did after I left. 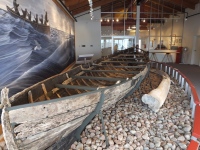 On down the coastal roller coaster road I went until I ran out of pavement at Red Bay.  The road, of course, continued to Goose Bay to the north, but it was 250 miles or so of dirt and rock and definitely was not part of my itinerary.  Instead, I wound my way through the small village until I came to what I was looking for:  The Red Bay National Historic Site featuring the archaeological discovery and preservation of a 16th century Basque Whaling Station.  About 50 years ago, a researcher in the Basque region of Spain came on some documents that indicated a whaling station had been in this area and that find led local archaeologists and park officials to begin looking for evidence on land and, more importantly, underwater because of the belief that a large Basque ship had sunk in the Red Bay harbor during a storm. 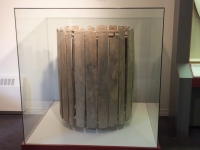 About 450 years ago this barrel was full of whale oil before it went down with its ship.

The land-based artefacts such as distinctive red roof tiles and the locations of large ovens for rendering whale blubber into oil were discovered fairly quickly and in short order, divers located the best preserved ship of its kind in the world and began efforts to carefully, a piece at a time, salvage the rare underwater find.  As a result of their efforts, Parks Canada created another fantastic visitor’s site that explains how the first commercial industry in the new world had been established, run and then collapsed.  Red Bay today has only about 150 residents; when the Basque were there almost 500 years ago the summertime population was probably close to 1,000. 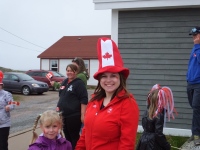 Does this shout Canada Day?

As a bonus to my trip to the Historic Site, I watched and even participated in the annual Red Bay Canada Day Parade and Celebration.  Up the road came the firetruck (a chevy pickup) with lights flashing, followed by four boys on bicycles, a dozen or more eager children waving small Canadian flags and wearing Canada Day Hats and streamers in their hair, and their parents bringing up the rear in a headlight-glaring automobile procession.  Once the parade reached the site, the head ranger lowered the red and white Maple Leaf ensign, then raised it again as the gathered revelers sang O Canada, then everyone moved inside to sing Happy Birthday to their native land and eat a cake decorated with a strawberry maple leaf.  A good time was had by all, including me. 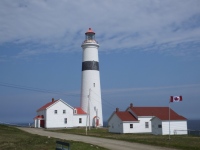 On my return trip to Fronteau where I’m spending the night, I stopped at another lighthouse (just to make a friend even more jealous).  This one, built in the 1850s with six-foot thick walls to withstand winds clocked at more than 140 miles per hour, is the second tallest lighthouse in Canada at 109 feet and still operates to warn passing ships not to get too close to the shore that, over the centuries, has claimed hundreds of boats and ships, from small fishing trawlers to British Navy destroyers.  The lighthouse keeper’s house, attached to the lighthouse, is open to visitors as is the tower itself, all the way to the very top where the modern fresnel lens sends a bright beam miles offshore.  When I was at the top today, the wind was howling strong at 30-35 miles an hour.  I would not want be there in triple-digit winds.

At the lighthouse they had gathered and displayed an impressive collection of map reproductions of the Labrador Straits going back more than 500 years.  It was there that I learned how Labrador got its name.  It’s from the Portuguese “lavrador” which means small land holder and is attributed to an early Portuguese explorer.  And all this time I thought they had named it after a water-loving dog.  Who knew?

Pie report:  Another slice of bakeapple by a different chef.  Same result:  yummy.

Tomorrow, the ferry returns to Newfoundland with me and my iron steed aboard, and I head for the central and eastern portions of the big, friendly island.  I can’t wait to get on the road again.

Watch out for rocky shoals and I’ll do the same.