Newfoundland/Labrador Day 8: Miner’s Museum and Board the Ferry

Woke up to gray, scudding clouds over Sydney promising rain, but not a lot of it.  And they lived up to the promise with off and on drizzle and light rain much of the day.  Fortunately I didn’t have far to go today so I wasn’t too concerned about the petty precipitation.  Took my time leaving the hotel after taking care of some long-distance domestic financial chores.  Even on the road, bills still have to be paid.  I even took time to wash my bike this morning, knowing it was going to rain today; seven days of bugs and mud make for an ugly bike.  As I write, it’s sitting in the rain, covered with mud again, but at least the bugs have been flushed down the Sydney sewer system.

Wish wished me well on my travels.

The only thing on my limited agenda today was to return to the Coal Miner’s Museum in Glace Bay for an extended look around, including a tour underground and undersea, as it turns out, because the mine tunnels go under the ocean.  The one I was in went only a few hundred yards beyond the beach and about 65 feet below the ocean floor.  But other mines in the area go out as far as eight miles from land and are 2,700 feet below the ocean floor.  Very interesting experience and I got to know, briefly, a retired miner named “Wish” Donovan who served as my tour guide and with whom I would like to have spent more time.  Wish mined coal for 36 years, as had his father and his father’s father.  And then, begining in the 1970s the mines began to close.  I think the last of the eight operating mines near Sydney closed in the 1990s after producing coal for more than 200 years, beginning when the French still held Nova Scotia.   Closing the mines devastated the economy of Cape Breton and they’re making efforts to re-open some, but it doesn’t look promising. 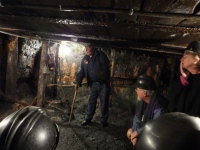 Wish explains the dangers of mining.

After having gone into a mine for a very short time and a very short distance, I can’t imagine wanting to do that for a living, but the miners I talked with in the past two days wouldn’t want to work anywhere else.  Coal dust that goes into your  mouth and lungs, also gets into your blood, I guess.

Wish reminisced about the miners’ camaraderie, the experiences of starting in the mine as a 16-year old, and the struggles of the Union to improve working conditions (mining is the most dangerous job in the world) and pay.  The history of coal mining in the late 19th and early 20th century was pretty much the history of labor struggling against absentee owners. The older miners, especially, have strong feelings about gains made by the unions before the 1950s. 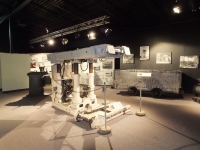 This keeps the ceiling from falling on your head in a mine.

The museum exhibits included information on the geology of coal formation, the changing technology of mining, and the various uses for coal and coal by-products.  The museum was created when it won a competition to be one of 100 institutions to be substantially supported during Canada’s centennial celebration a few years back and was the brain child of one woman in Glace Bay who wanted to preserve a culture she could see disappearing.  They’ve also reconstructed such things as company houses and a company store that would have kept miners in debt no matter how hard they worked.

After I picked up a CD of the “Men of the Deeps” and Wish gave me a piece of coal (haven’t had one since Christmas as a child), I took one last look at the gray, misty skies over the ocean next to the museum, put on my rain gear and headed for the ferry departure point in North Sydney.  I got here about five hours early, but I wanted to make sure I didn’t miss the boat. 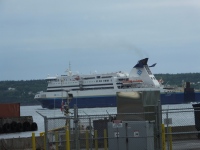 My ride back in two weeks.

I watched the ferry that I’ll catch in two weeks for the return trip from Newfoundland depart for Argentia and then watched the ferry I’m about to board for Channel Port aux Basques make its landing and unload.  I think I’m still an hour away from boarding but thought I’d try to get this posted early so I can sleep on the way to Newfoundland.

I’m going to try to post Flickr pictures, but the wifi connection here at the ferry terminal is slow, so I’m not sure I’ll get any of them up.

3 responses to “Newfoundland/Labrador Day 8: Miner’s Museum and Board the Ferry”