Newfoundland/Labrador Day 3: An All American Day

What could be more All American than hot dogs, baseball and apple pie and traveling on an American-made motorcycle?  I managed to squeeze all of that into one day (if you count Apple Crisp as an apple pie).

The jewell of Cooperstown.

I was close enough to Cooperstown, New York, to visit the National Baseball Hall of Fame and Museum, so I took a quick tour of the place.  It’s an amazing collection and display of baseball memorabilia that begins in the mid 19th century and goes to the present big-league, big-money enterprise that America’s favorite pasttime has become.  From changing equipment to the changing faces of the game to the always changing records that may get harder to break but usually get broken somehow, this three-story museum has something for every baseball fan.  It’s clearly a place where baseball aficionados can spend days and the 2 hours I allowed myself didn’t do the place justice. 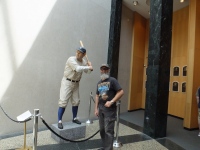 Me and the Bambino

But it was fun to walk through and it brought back memories of my youth when I actually played the game, knew the players, collected the cards (which my mother threw away while cleaning out the basement) and even attended a few games.  The display of the old Milwaukee Braves, for example, recalled my first trip to a Major League stadium to watch Eddie Mathews, Del Crandall, Warren Spahn and young fella by the name of Hank Aaron play the game.  Don’t remember who they played or what the score was, but I remember sitting in the stands on the third base side of the stadium eating pop corn and cheering for the Braves.  Today’s visit to the Hall of Fame also included a chance to watch other old men reminisce to young boys who dream of a chance to go to the big dance.  It was 2 hours well spent. 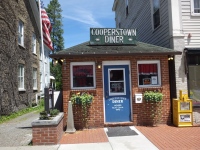 After the museum, I walked around Cooperstown and discovered an old diner that still served hot dogs the way they’re meant to be served.  I ordered a jumbo dog but they were out so the cook gave me two of their regular dogs.  I told Louise-the-waitress I thought they were two jumbo dogs but she assured me they weren’t.  I ate them both so I didn’t have room for the pie I expected to have with lunch.  Instead, when I got to Middlebury, VT, and settled in for the night, I found a cafe that had homemade Apple Crisp with apples actually peeled in the kitchen.  Not quite pie but close enough.

For the first time on this trip I completely avoided Interstate highways, depending instead on the fortunes of state roads, county roads and some roads that didn’t qualify as either.  The quality of the roads in New York continued to be a mix of truly awful, moderately terrible, and, in some cases, pretty good.  A constant problem was trying to predict when a pretty good road would devolve into the bone-jarring variety.  I always slowed down after the first major bump, which they occasionally warned drivers was ahead somewhere in the undefined distance, but hitting the first one each time resulted in a series of unkind words for the NY DOT. 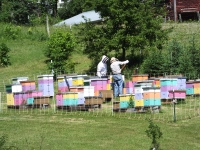 Colorful hives, but I don’t think the fence will keep the bees in.

While the roads may not always have been to my liking, the scenery almost certainly was.  Every time I travel across America I’m reminded what a beautiful place it is.  Soaring mountains, rolling hills, cascading streams and serene lakes.  What a good way to spend the day.  The mountains in New York, at least the ones I saw were mostly in the Adirondack State Park (the biggest state park in the U.S.)  At only about 3500 feet, the tree-covered slopes are not as tall as those in North Carolina/Tennessee or the American West, but they still have the power to instill awe in the viewer.  But what made these hills different from others, I think,, is  that they are dotted with thousands of lakes.  Once I got into the Park, I was almost always in sight of water somewhere, in the form of brooks, creeks, streams, ponds or lakes.  Sometimes you have to search for the lakes between the trees, but that’s not always a good idea when you also have to be searching for road breaks and pot holes.

One of my realizations today was that triple digit roads are better for riding than two digit or one digit roads.  And roads with names of local farmers or landmarks instead of numbers are even better.  The small county roads, where you have to go slower because they make no effort to straighten them out and the narrow asphalt ribbons frequently intersect driveways and hidden farm roads, are the best places to slow down and smell the roses (or the hay or the alfalfa or the manure).  And sometimes it’s nice to just stop on the road and look around at well-kept farms, contented stock and hard-working farmers.

Between the two-hour stop at Cooperstown and the enjoyable but slow country roads, it too, me almost 11 hours to go less than 400 miles.  I’m ready to finish my Jack, take a last look at the sun as it sets over Vermont and get ready to head for Canada, eh?

I should cross into Canada about 11 a.m. tomorrow and will head for a currency exchange to trade my Andrew Jacksons for some Loonies and Toonies.  Looking forward to roads where the speed limit is 100.  Well, in Kilometers Per Hour, anyway.

Everyone stay safe and I’ll try to do the same, eh?

8 responses to “Newfoundland/Labrador Day 3: An All American Day”