Great Alaska Adventure: Another Day at the Ranch 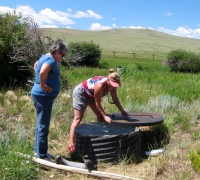 Friday.  Time to check the springs to make sure water was flowing through the 10 mile watering system Linda installed a few years ago when the climate became dryer and natural water became increasingly scare in the pastures.  Normally Linda would take her four-wheeler for this job, but she wanted to show Marilyn and me parts of the ranch we hadn’t seen before, so the three of us and two dogs loaded up in a Toyota 4 Runner and headed for the springs along a two-track road.

At home on the range.

It was probably only 8-10 miles to the source of the springs, but the road was so rough the Toyota inched along at 10-15 mph to accommodate the rocks deposited by glaciers millions of years ago.  If Linda could find a way to market rocks she’d have more money than Bill Gates.  The three of us and two dogs bounced along the rutted track while Linda pointed out property lines, sections, water tanks and wildlife.  Along the way today we saw a deer, 50-60 antelope, and the biggest rabbit I’ve ever seen in my life.  That rabbit could have given a kangaroo a run for its money.  I swear that rabbit’s ears came up to my waist. 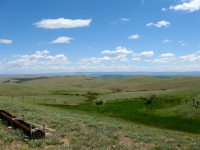 Linda’s ranch as seen from the springs.

As we drove further away from her house and the river, we climbed steadily up a small mountain to the spring, stopping to inspect a water holding tank and check the condition of very small reservoirs.  When Linda first mentioned the reservoirs I had visions of lakes or large ponds covering thousands of square feet.  Wrong.  These small, dirt-dam, hand-built reservoirs that trap snow melt and the occasional rain cover a couple hundred square feet, though decades ago when there was more rain and snow and less heat they covered 3-4 times that much.  Water is clearly the most precious commodity on a ranch in Wyoming.  No water, no animals.

We arrived at the springs and Linda did what she needed to do to clean and treat the “spring boxes” where the springs are tapped and the crucial delivery system begins to route water to various dry pastures.  All was well and we headed back to the house but took a different route so she could show us more of the ranch.

This was Linda’s house as a girl during lambing season.

For the first two generations of this three-generation family ranch, sheep were the source of income.  When Linda was growing up on the ranch, 1,200 sheep grazed these dry hills.  A sheep ranch requires a variety of operations foreign to me, so Linda tried to enlighten me on what life on a sheep ranch was like.  On the way back to the house from the springs, we detoured to the old “lambing camp” where for one month a year in May the family and a couple of hired hands would corral pregnant ewes and try to improve the survival rate of the lambs.  The camp was primitive at best, with pens for the sheep, “jugs” where the new lambs and their mothers could get acquainted, a couple of shacks for the hired hands and a clapboard house where the family lived for a month.  Linda’s memories of life at the camp are mixed:  some good, some not so good.  But that was the life she grew up with.

Relaxing in the river: Me, Ean, Linda, Doug, Jean

The tour done, we headed back to the house where Doug and Ean were smoking three huge chunks of beef for a ranch dinner later that evening.  While the meat smoked in the smoker designed and built by then 17-year old Ean, we headed for the river for an afternoon soak in its cool waters.  Linda’s 80-year old mother,, Jean, who lives in town arrived and joined us in our aquatic pursuits.

Several other friends arrived for dinner and we stuffed ourselves with smoked tri-tip and eye of round and beef heart, sliced potatoes with onions and green chilies, and a couple of salads.  The dinner conversation was loud, raucous and always entertaining with stories that could only be told in Wyoming.  Hunting stories.  Drinking stories.  Work stories.  Character stories.  All with only a little exaggeration and hyperbole.  It was a great time.  Listening to Linda explain everyday life at the ranch and the exploits of her friends is always a great time.  By comparison, a 12,500 mile motorcycle ride to the wilds of Alaska seems tame.

In the evening as the party broke up, we headed back to the bunk-house, satiated by another full day on the ranch.

3 responses to “Great Alaska Adventure: Another Day at the Ranch”