Today’s transportation out of Seward.

Today’s ride only went 95 miles round trip.  And it took six hours.  And it was on a boat.  The Aialik Voyager, by name.  And today’s numerous animal sightings were of the ocean-going kind.

After first ensuring we were not scheduled to sail on the SS Minnow, we signed on for a nautical tour of Kenai National Park and Kenai National Wildlife Refuge sailing out of Seward.  The Aialik Voyager, a new catamaran owned by Kenai Fjords Tours could cruise at 26 knots (that’s 30 mph to you land lubbers) while allowing us to be warm and cozy inside with good service from the crew of three (plus the captain) but to go on deck when sightings were made.  The warm and cozy was a good thing, because today’s temperature never rose above 60 degrees and at times dipped below 50.

The dramatic landscape featured sharp mountain-islands rising into the low hanging, ever present clouds.  Early in the trip a misty, windy rain partially obscured the islands, but as we left Resurrection Bay and headed south into the Gulf of Alaska,  the weather improved marginally when it quit raining.  It wasn’t long before we had our first humpback whale sighting.

Humpback breaching with its 35-40 ton body.

Fortunately, the captain said, it was a happy playful whale that repeatedly slapped the smooth surface with its long dorsal fin or, even better, with it’s fluke.  Every once in a while it would dive, disappear for 20 or 30 seconds then breach the surface, bringing the majority of its huge body out of the water and coming back down with a massive splash.  The captain said that behavior is not seen often on the cruises because the whales are usually seen feeding, as were two other humpbacks we saw later in the day who dove, floated, dove again and floated again.  The latter two were interesting. The first one was amazing.

We saw two different pods of resident Orcas (Killer Whales), the larger of which was close to the boat.  We watched the black and white predators cleve the blue-green water for several minutes as they moved through their habitat hunting dinner.  At the end of the stop, the 8-10 Orcas we had been watching began swimming in unison, rising to the surface, arching their dorsal-finned backs before a brief dive and then skimming along the surface again. It was like watching five-ton synchronized swimmers.  Fascinating.  The captain was able to identify some of them, but they all looked like Shamoo to me.  By the way, Orcas are not actually whales.  They’re the largest species of the dolphin family.

Between the whale sightings we also saw a pod of playful Dall Porpoises that swam back and forth across the bow wake like it was all good fun for them, frolicking for visiting Floridians.  I wondered how you tip a porpoise for a good show, but I couldn’t come up with an answer.  I think they do it for the fun of it.  Just like riding a motorcycle

Stellar Sea Lions taking Sunday afternoon off and lounging on the rocks.

Less active, but interesting nevertheless, Stellar sea lions posed for the camera on rocks at the base of an inaccessible island, as did a half dozen seals at another location.  And between the whales, porpoises, and seals, we watched colorful puffins attempt to land (and occasionally succeed) at their nesting areas high on the ledges of yet another stark rock island greenly capped on top by a small spruce forest.

Yesterday we walked to the edge of Exit Glacier.  Today we boated to the edge (1/4 mile is as close as we were allowed to get) of Holgate Glacier, a part of the 700 square mile Richardson Ice Field.  Exit Glacier is an extension of the same field.  But Holgate Glacier was much bigger and much more dramatic as we floated soundlessly in the sound, listening to the living ice creak, grown and pop, continuing its relentless cycle of moving to the sea (at a glacial pace, of course) and breaking up. 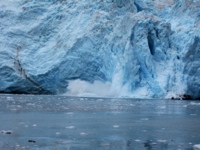 We even witnessed several small calving events as tons of ice broke off the front of the glacier and crashed to the water with a thunderous roar and a huge splash.  We could see the small 3-4 foot waves created by the calving but were told that larger chunks can create waves 10-20 feet high when they separate and slide to the sea, which is why the boat maintained a safe distance from the glacier’s face.

The glacier was the last scheduled stop on the tour, but we did come dead in the water once more for the second humpback sighting.

Dinner again back in Seward.  Marilyn is developing a high-priced halibut habit, but that’s all part of the adventure.  It’ll be cold turkey for her once we’re back in Orange Park.

Rain in store for the next three days we’re on the Kenai, but we’ll brave the elements as best we can, heading to Soldotna tomorrow for a two-day stint that may include an excursion to Homer and a little fishing.  At any rate, the adventure will continue.