Hanna had a 6 a.m. flight, so that meant 4:30 reveille to get her to the airport and through screening where the biggest issue seemed to be a small can of body mousse.  Once assured it would not bring  down the plane, the TSA screener let her pass.  She’s now safely back in Bloomer with her friends. 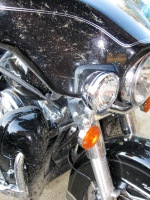 Five days on the Alaska Highway.

I took advantage of a short riding day and an early wake-up to clean five days of Alaska Highway grime off the bikes.  I was hesitant to do it for fear that I would discover that my new bike is now VERY USED.  It is.  Small chip in the fairing, several scratches and caked on mud in places I’ll never get clean again.  I washed them both and did what I could, knowing that more road construction undoubtedly lay ahead.  And it didn’t take long.  On the Parks Highway to Denali this afternoon we drove into 10 miles of construction and another close-up view of a pilot car.  Word of advice:  If you’re thinking of coming to Alaska and buying a new bike, do it in that order.  Better yet, borrow a friend’s bike for the trip.

There’s much to see and do in and around Fairbanks, but we only had time for one excursion and headed to the University of Alaska’s Museum of the North.  What a great facility!  We browsed for almost four hours and probably saw less than 25% of the collections and galleries.  But the sections we saw were first-rate.  The museum first opened in 1929, only 12 years after the University was chartered and first showed a collection of native displays and paleontological finds.  It’s grown dramatically over the years and is now housed in an impressive, architecturally superb building specifically designed to show off the outstanding collections.

We visited one gallery of art by Alaska artists.  Most of the paintings focused on real people, real places, and real scenes that gave a good feel for the land and its inhabitants.  No abstractions here.  It was a small collection, but a great introduction to the museum.

We also took in a 30 minute film on the Aurora Borealis that gave a solid scientific explanation of Alaska’s colorful wintertime night skies.  It’s only been in the last 50 years that scientists have determined the relationship between atmosphere, magnetic fields, and solar winds that produce the shimmering green and sometimes red lights 50 miles above the earth’s surface.  Turns out that Fairbanks is just about the perfect spot to view the muted pyrotechnic displays.

But the real heart of the museum, at least for us today, was the gallery that tries to convey a complete picture of the 49th state by displaying side-by-side artifacts such as prehistoric mammoth bones, a menagerie of taxadermied wild life, native cultural historical and craft displays, gold mining, oil production, and a general history of Asian and European influences since the 17th century.  I’ll let some pictures I took show what I mean: 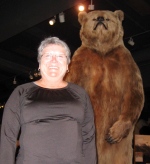 Did you know glaciers can move up to 60 feet in a day?

The Russians  departed when they sold Alaska to us in 1867 but left behind an important legacy.

For those of you who need “cute.”

There were a lot more pictures but this gives you an idea of what an eclectic display it is. 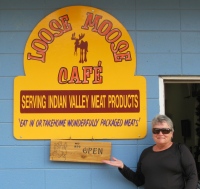 Caribou for lunch? Of course.

After lunch we rode 113 miles to Healy for the night.  Several forest fires meant some of the best views were obscured, but the ride was pleasant.

Tonight’s Pie Report:  Bumbleberry a la mode.  And that was my entire dinner.

Smokey Mountains, but not the Appalachians.

Tomorrow:  Denali National Park and Mt. McKinley if the weather’s clear.  But the forecast calls for 40% chance of rain, so it doesn’t’ look good.