Yesterday I included a snide remark about North Dakota’s low scenic value. I apologize for that. Today I learned that North Dakota is not the flat, boring wheat-field patterned state I imagined it to be. Turns out there’s a striking beauty that’s been there thousands of years.

We started out today in Fargo at 8 a.m. under overcast skies that darkened gradually as we headed west on I-94. We had only motored about 60 miles when a look at the minacious clouds scuttling northeast in the distance convinced me that rain gear was the appropriate dress code for the rest of the morning, and we all suited up. About 20 miles down the road we saw a few puddles on the sides of the pavement and as we veered northwest at Jamestown we caught a few sprinkles. Although we saw significant rain in the distance to our left and right, we fortuitously dodged heavy rain, at least for a while.

As we approached the third hour of today’s ride, the skies again darkened dramatically and we stopped again for another iPad-assisted radar weather check. As luck would have it, the cafe we stopped at had PIE! The Chieftain Motel, Lounge and Restaurant in Carrington offered several tempting varieties of pie. I selected a big enough slice of Coconut Creme to last long enough for the approaching rain to come and go. Nothing says lunch-on-the-road like freshly baked Coconut Creme pie.

Marilyn met a big man at the cafe as the picture suggests, but ultimately he didn’t measure up to me and she saddled up and continued to follow my tail light north.

The black clouds turned gray and then billowing white as the final three hours of the ride went through country that precipitated the apology in the initial paragraph of this post. It turns out that North Dakota (and South Dakota, Iowa, Minnesota, Saskatchewan, and Alberta) have a common feature known as the Pothole Prairie Region dotted with hundreds of thousands of small lakes and ponds, especially in the spring and early summer as winter snows melt and, instead of draining in creeks, streams and rivers, fill up the holes that had been created through glacial action 10,000 years ago. 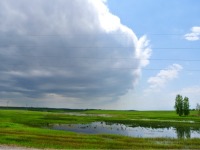 It turns out that the ponds and lakes make perfect habitat for migrating and procreating waterfowl (e.g. ducks) that swam and flew in great numbers along our route. (As an ironic aside, while I was watching one of the ducks swimming in a pothole I hit a deep, non-glacial pothole in the North Dakota highway. No damage, but I could have ducked it if I hadn’t been watching the duck.)

The ride got even more interesting as we neared Minot because the flat land started to develop bumps. Not mountains, by any stretch, but nice rolling hills that framed the valley through which we were riding. I had all along thought North Dakota was flat as a billiard table. See what you can learn when you go on a 12,000-mile ride through this beautiful country of ours?

Tonight we’re about 40 miles from the northern border of the United States and tomorrow we present our passports and put away our cell phones, which become very expensive at $.59 a minute in the Dominion of Canada. Destination tomorrow: Saskatoon. Weather forecast: Clear to start and rain to finish. Hey, it’s an adventure.

(Don’t forget to double click on the pictures for larger images.)