On July 13, 1806, Captain Clark and 12 others, including his slave York, the interpreter Charbonneau, Sacagawea, and their 18 month-old son Jean Baptiste, left Three Forks heading east to find and travel down the Yellowstone River to the Missouri.  Two days and about 50 miles later he and his party found the river that has its beginnings in Yellowstone Park and empties into the  Missouri at roughly the Montana–North Dakota border.  It is currently the longest free-flowing river in the lower 48 states.

This photo was taken near the spot where Clark crossed into the Yellowstone watershed.  The right to left slope in the foreground  marks the valley into which he descended to locate the Yellowstone River, about 10 miles away.  At this point, he was about 40 miles north of Yellowstone Park at the  Wyoming/Montana border.

Interstate 90 generally follows the route Clark took from Three Forks to Billings, a few miles from Pompey’s Pillar, where I stopped a little more than two weeks ago on my way west.  During the past three weeks I have covered Clark’s1806 return route from Traveller’s Rest, but I ended up doing it on three separate days, twice going the wrong direction.  Nevertheless, today’s ride from Three Forks to Billings completed the loop I wanted to make of the expedition’s entire 1804-1806 travels, with three exceptions:   the Missouri Breaks where I had hoped to canoe, the dirt/gravel road at Lemhi Pass, and Lewis’s 1806 diversion into Blackfoot country following the Marias River while Clark was on the Yellowstone.

Clark’s group traveled by foot for three days along the Yellowstone before he found cottonwood trees big enough to make dugout canoes.  From July 20 through July 24 he and his party halted to make two small canoes, which they lashed together to provide greater stability.  As Clark pushed off in his canoes, he split his party again, sending a sergeant and 3 men with the remaining horses overland to try to reach the Mandan villages before the rest of the expedition regrouped and arrived there.

Two days after the men with the horse sset off, Indians stole the herd and the four men were forced to return to the river, construct buffalo-hide covered bull boats and attempt to catch Clark in his canoes.  They eventually did, but not until Clark had reached the Missouri river on August 3, three weeks after he left Three Forks, and was waiting for Lewis.

Lewis, meanwhile, after his escape from the rightly irritated Blackfeet, slowly made his way down the Missouri with the rest of the party, nearly a week behind Clark.  On August 11, while Clark waited patiently at a camp on the Missouri, Lewis and one other man, who happened to be blind in one eye and terribly nearsighted in the other, went ashore to hunt elk.  Lewis, dressed in buckskin, apparently looked like an elk to the visually challenged hunter, who mistakenly shot Lewis, sending a ball through both buttocks.  Lewis at first thought they were being attacked by Indians, but they soon discovered the mishap was a friendly fire incident.

The next day, Lewis’s party caught up with Clark’s group and the expedition–all 33 persons and a dog–were once again united and continued their journey, though Lewis was in considerable pain and could not walk or sit, forcing him to ride face down in one of the large pirogues for more than a week.

At Billings, Interstate 90 turns south toward Wyoming, and I followed its path.  My connection to the Lewis and Clark Trail is now severed, though I’ll continue over the next couple of postings to track them until they reach St. Louis.  As I exited Montana and entered Wyoming, the Big Horn Mountains, still with traces of snow at the highest elevations, rose on my right side.  I can still see them from my location this evening in Buffalo, Wyoming. 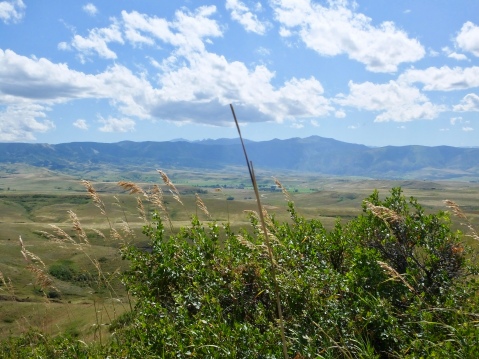 The Big Horn Mountains rise in the distance.

Tomorrow I’ll reach a friend’s ranch just outside Laramie and stay there until Friday.  Linda, who owns and operates an 8,000 acre ranch by herself, does not yet have internet or cell service at her beautiful but isolated house.   I’ll keep writing while I’m there and will post those pieces Friday after I return to the 21st century.  I’ll continue to write and post until I return to Maggie Valley in about 11 days.

In the meantime, here’s another link to the map I started this blog with for those who to try to make geographic sense of their and my trips.

ROUTE MAP:  Click here for a PDF map of the entire Corps of Discover route. This map opens in a new window.